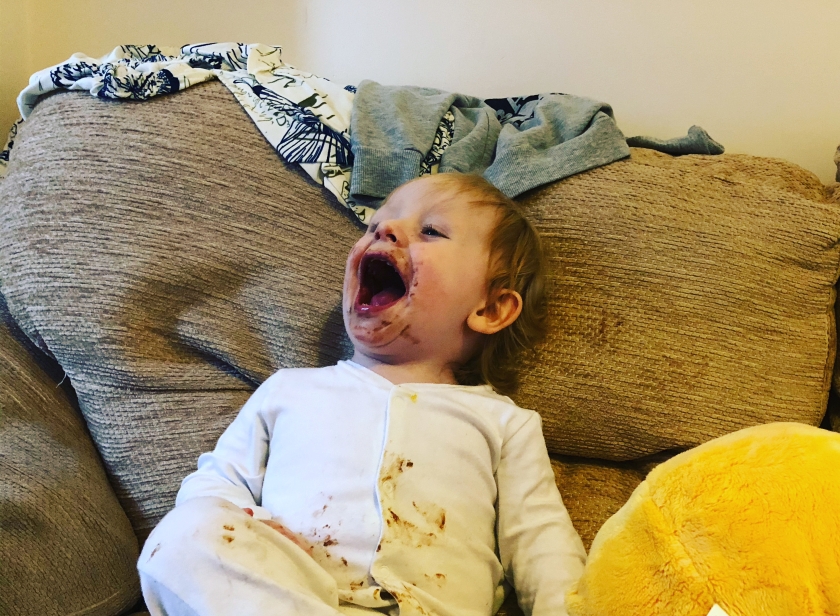 I was looking back at my recent posts last night and realised something was missing. Something far too big to be leaving out of posts and the whole reason this little blog exists. Something’s name is Robbie, my very reason for starting a parenting blog.

Of course the world is currently crazy. We are all trapped inside a rather strange and terribly slow paced horror movie of which we do not even know the running time. I’ve spent my time writing all about social media, health kicks and society in general but that is not what I love.

So this post is all about my little man. For those checking in looking for any constructive advice or or insightful thoughts, this is not your post I’m afraid. For friends and family that we miss dearly, I’d love you to read on.

Robbie is growing up way way too fast. He’s learnt a few new tricks and ways to ensure we don’t relax too much on our extended work holiday that I want to share.

The most impressive yet frustrating of these is that he is now an expert in the word “no.” This may sound like a Godsend to some parents, but sadly Robbie is not using this power for the greater good. The main issue being that he knows few other words to go along with it, the main one being ‘yes.’

So here is how that is playing out in reality. Robbie is now developed enough to hunt down the tv remote and hand it to us then turn to watch the TV. We will select one of the 3 million possible shows that he may want to watch and he will turn and shake his head if this selection is incorrect. The ordeal will last until we finally pick the right one at which point he usually just wanders off and finds a toy anyway.

We face the same situation all over the house. Pointing at the cupboard where we keep his snacks and picking them out one by one as he shakes his head. We try naming snacks hoping for a reaction to the one he wants but.. nothing.

Another change around the house is that I have been further relegated in my position as man of the house. Having previously held a solid third place behind Robbie and the cat, I have now discovered another man holding more authority than me. Blippi.

For those of you who are fortunate enough to have never come across Blippi, consider yourselves very lucky indeed. He is the new king of toddlers with an incredibly annoying kids YouTube channel in which a fully grown man generally acts like a small child and jumps around like a moron in kids play areas. Of course, Robbie is hooked.

If Robbie is playing up, the threat of turning off Blippi will stop him. If I need five minutes to get anything done (pretty rare) Blippi is my man. It’s pretty clear that Blippi holds far respect than poor old Dad.

One of the more pleasing developments with Robs is his counting. We can not really be sure if this is normal at his age but his counting is now exceptionally good. A couple of weeks ago we were shocked as we found that we could point at numbers and the little genius could name them. We were even more shocked days later when he counted from one to ten without any prompts as we moved items from one place to another. Not bad for a man that still licks windows. He’s also coming along really well with with colours and the alphabet and my latest mission to make him roar like a lion is making progress too.

It goes without saying that Robbie is going to be a great footballer and now the training has began. He is starting to kick the ball around the garden with me rather than just picking it up which is a rather big part of playing football. See what a great coach I am? I really can’t wait to spend days and nights playing footy with him, even if my fitness levels may not be the best these days!

We also seem to have a new great toddler activity that Robbie has created all by himself that seems to go against my genius theory. He will climb up on anything he can such as the sofa or his toy box, before jumping down headfirst when Sarah or myself are nearby. We always catch him, but there have been a few occasions that he has almost caught us off guard. Hopefully he’ll grow out of this one soon.

That’s pretty much it for the update. Other than still being an even fussier eater than me and yet to have a full nights sleep for 19 months, he is growing up just fine despite missing all his friends and family right now. It won’t be long though, see you all soon!

More from the diary of Dad

The final part of our fight to quit smoking. Including a few tips and tips to help with the struggle alongside my own personal story.

Part two of the quit smoking journal. 14 days in and we now have an official quit date. Things just got scary!

Freedom – It’s all a bit overrated

Many of the tougher restrictions in the UK have now been lifted for a week. Are things any better? Are we more free? Am I just a miserable guy asking questions?

One thought on “It’s been too long”